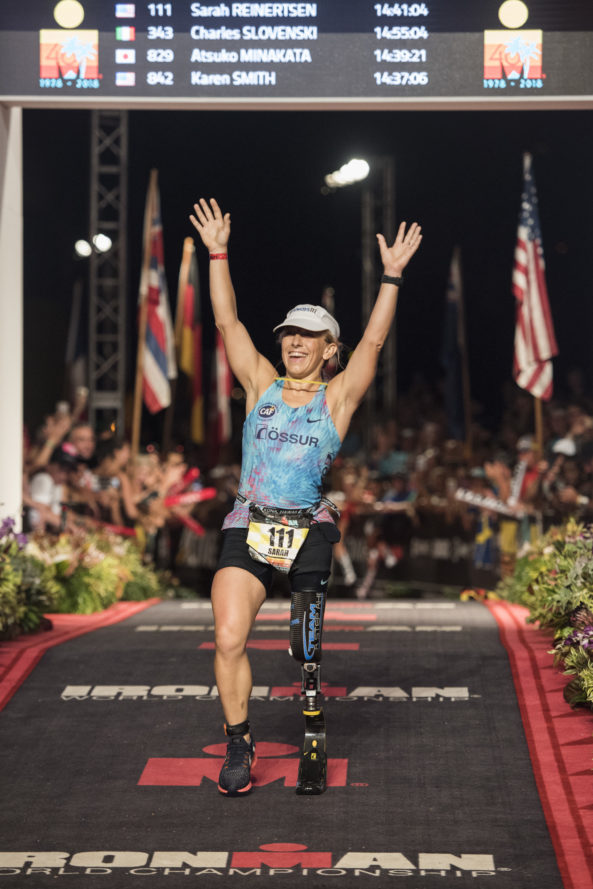 Sarah was recently featured in Equinox Magazine Furthermore. She participated in a Q and A with Michelle Malia. She Paratriathlete who was born with a congenital femoral deficiency— meaning while she was a small child her thigh bone stopped growing. At just seven years old, she opted for an above-knee amputation. This has not stopped her from pursuing her athletic dreams. She does face unique challenges that athletes without her particular disability do not face. In the Kona Ironman for instance she faced the following:

In the swim, I can’t wear my prosthetic, so if I kick too hard it pulls my body to the left. I need to kick a little for propulsion, but not so much that I end up swimming extra.

The ride in Kona is hilly, with 5,800 feet of elevation gain. I can stand up on a stationary indoor bike because it’s grounded, but I can’t do that on a road bike because I would tip over. I just have to sit and patiently grind it out to get to the top. Ninety percent of my power in the Ironman comes out of my right leg.

As an amputee, I use 40 percent more oxygen and twice as much energy as two-legged people do, so I’m at a cardiovascular deficit right there. The marathon is hard, but I’m not as nervous about it because running was my first sport.

Read the entire Q and A online in Equinox Furthermore Magazine.

This website uses cookies to improve your experience while you navigate through the website. Out of these, the cookies that are categorized as necessary are stored on your browser as they are essential for the working of basic functionalities of the website. We also use third-party cookies that help us analyze and understand how you use this website. These cookies will be stored in your browser only with your consent. You also have the option to opt-out of these cookies. But opting out of some of these cookies may affect your browsing experience.
Necessary Always Enabled
Necessary cookies are absolutely essential for the website to function properly. This category only includes cookies that ensures basic functionalities and security features of the website. These cookies do not store any personal information.
Non-necessary
Any cookies that may not be particularly necessary for the website to function and is used specifically to collect user personal data via analytics, ads, other embedded contents are termed as non-necessary cookies. It is mandatory to procure user consent prior to running these cookies on your website.
SAVE & ACCEPT