I use many different types of prosthetics for both sport and life. For triathlon, I use separate prosthetics for the bike and the run. However, I do not use a prosthetic for the swim, as assistive swim devices are forbidden. 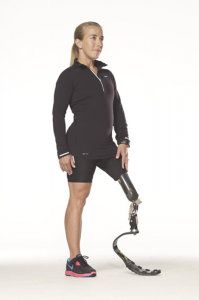 When I started running in the late-80’s, I didn’t have a running prosthetic, I just ran with my everyday leg.  In the early-90’s, I began using the Flex-Sprint by Flex-Foot in track & field competition leading up to the 1992 Paralympic Games in Barcelona.

A lot has changed in the past 20 years. First, I am no longer a sprinter, having “reinvented” myself as an endurance athlete. Also, Össur, which acquired Flex-Foot more than a decade ago, now manufacturers an entire line of running feet, providing a lot more options than existed when I first started out.

Today, I use the Össur Flex-Run with Nike Sole coupled with the Össur Total Knee 2100 for distance running. The Flex-Run is extremely versatile and can be used for a variety of applications, whether you are running in a softball game, a 5K or a marathon.

It isn’t essential to have a separate cycling leg just to ride a bike. When I first started riding, I used my everyday leg and a standard bike shoe with a cleat to clip into the pedals. I tried toe straps early on but quickly learned that clipping into the pedals was much better. Especially for amputees, the direct contact with the pedal is extremely helpful. Once I got more serious about cycling and triathlon I had my prosthetist build me a special leg just for the bike. While I typically prefer the Össur Total Knee 2100, for my cycling leg, I went with the Total Knee 2000 because it is lighter. For the foot, we shortened an Össur Vari-Flex, cutting the “toes” off and bolting a bike cleat right to the bottom of the carbon foot. The socket is pretty standard; it just has a lower trim line so it doesn’t rub on my upper thigh or hips when I pedal for hours. I don’t make any adaptations to my bikes. However, since I am basically riding with one leg and I can’t get out of the saddle on hills, I find a big range of gears is an absolute necessity.

Traditionally, my everyday setup of choice has been the Össur Total Knee 2100 combined with the Össur Vari-Flex foot and Össur Iceross Liners 3mm and 6mm liners. I have used this combination for years. However, recently, I switched to the new Össur Vari-Flex XC, as I find it has a more dynamic toe off that makes it all that much easier for me to get around while expending less energy. When I have a gala or red carpet event that calls for a dress and heels, I reach for my “Barbie” foot, an Össur Elation with 2.5 inches of heel height adjustability that is wrapped in a silicone cover from A Step Ahead Prosthetics. More recently, thanks to Scott Summit and the artists at Bespoke Innovations, I’ve added a super bling fairing to my “glam” look.

A Step Ahead Prosthetics

This website uses cookies to improve your experience while you navigate through the website. Out of these, the cookies that are categorized as necessary are stored on your browser as they are essential for the working of basic functionalities of the website. We also use third-party cookies that help us analyze and understand how you use this website. These cookies will be stored in your browser only with your consent. You also have the option to opt-out of these cookies. But opting out of some of these cookies may affect your browsing experience.
Necessary Always Enabled
Necessary cookies are absolutely essential for the website to function properly. This category only includes cookies that ensures basic functionalities and security features of the website. These cookies do not store any personal information.
Non-necessary
Any cookies that may not be particularly necessary for the website to function and is used specifically to collect user personal data via analytics, ads, other embedded contents are termed as non-necessary cookies. It is mandatory to procure user consent prior to running these cookies on your website.
SAVE & ACCEPT